Supporting Each Other And Resisting State Repression

Posted on November 27, 2016 by Antifa Sacramento 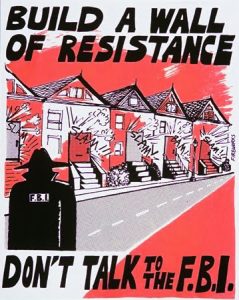 It has now been five months since the events that unfolded on June 26th. Given the gravity of the situation, we must assume that the investigation is fully underway and prepare for repression accordingly. It is abundantly clear that during this aftermath period, we can expect to see law enforcement take its usual route of targeting and isolating individuals in an attempt to gain information to be used both to prosecute and for ongoing surveillance purposes.

Keep yourself and your friends safe- don’t talk!

California Highway Patrol (CHP) has jurisdiction over capitol grounds, so by extension they are heading the investigation of the events that occurred on June 26th. It was CHP detectives who pursued each and every patient at the hospital who was attacked by Neo-Nazis, trying to squeeze out any information they could from incapacitated and often drugged victims. Now, it will be the CHP that approaches local activists in their homes, at work, through the phone, or on the street in an effort to find leads and instill fear and distrust.  Luckily, the injured had great hospital support that counseled them on the importance of silence and equipped them with the contact information of several trusted attorneys. We want to take this opportunity to provide the same level of support to everyone else in the community who may be unsure about how to best handle a police encounter. Now that the next phase of information gathering is clearly underway, spreading anti-repression resources around is all the more crucial.

If approached by the police, the CHP, or the FBI, ignoring their questions, firmly directing them to your attorney, and ending the encounter as quickly as possible is the best and safest way to proceed. All you really need to say in this situation is “I have nothing to say to you, and any questions you have can be directed to my lawyer”. Give them the name and number of a trusted lawyer, and end the encounter. Anything else you say can (and will!) be used against you and others. Answering even seemingly harmless questions can give officials enough information to prosecute or hold you or others. It is legal for them to lie to you, but illegal for you to lie to them. They will use this to their full advantage- enforcers of the law can and will lie to you as a tactic to instill fear and distrust, and will conversely try to catch you in a lie so that they can detain you for further questioning. They may promise you that your situation will be easier if you cooperate and tell them what they want to know, but they are in no way obligated to follow through on those promises. We are of the opinion that anyone who the CHP may think was involved in the 26th (regardless of if they actually were or not) is fair game to be contacted by them. Rest assured that should this happen to you, you are not alone and there is legal support waiting for you if you do end up facing state repression of any kind.

If it gets to the point that you are a suspect and a search warrant has been issued for your car and/or residence, you have the right to inspect the search warrant. Look for and make note of the date, time, location and a list of allowable things to seize. If you ever see that they are taking anything that does not appear on that list, it is actually best to let them take it because it will be thrown out as evidence later on. If you do bring to their attention that what they are taking is not on the list, they can call it in and get it approved, allowing them to keep the evidence. Finally, if you end up being detained or arrested, that’s your opportunity to again firmly say out loud that you will not answer any of their questions, and that all of their questions can be directed to your appointed legal representative. We would also like to remind everyone that, during an open investigation, pictures and videos are invaluable to law enforcement in their quest to prosecute. Do not share any videos or photos from the June 26th anti-Nazi demo that include individual’s faces in them- to do so is to endanger the individuals and quite possibly yourself. In this specific circumstance, sharing identifying pictures and videos poses a double threat. Exposed individuals may experience surveillance, intimidation, and violence by Neo-Nazis in addition to state repression.

This is a great time to educate ourselves (or re-familiarize ourselves!) with all the above information, as well as to do some outside research to better prepare ourselves for a possible encounter with law enforcement. As a part of a radical community, it is important to share this type of information widely so as many individuals as possible have access to it. State repression can be handled much more easily and result in fewer repercussions if we educate ourselves and support one another when faced with it.

The Civil Liberties Defense Center (CLDC) has been a vital resource for radicals here in the US for ten years now. They provide great legal support and educational tools for dealing with repression by both local law enforcement and federal agents. On their site you can find plenty of useful videos and flyers (such as this know your rights slideshow and the printable flyer below) regarding your rights as an activist and much more. 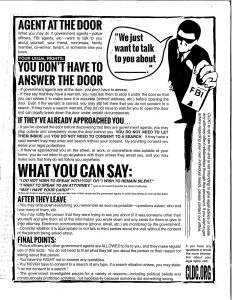 An informative printable from the CLDC.

This entry was posted in Anti-Repression and tagged anti-repression, June 26th 2016. Bookmark the permalink.