Posted on October 23, 2018 by Antifa Sacramento

Jeffrey Eric Perrine of Orangevale, CA, is a local far-right extremist who has become increasingly active in the patriot movement over the past year. Perrine is an openly anti-immigrant, racist, and transphobic Trump supporter. He has repeatedly attempted to disrupt liberal and leftist events in Sacramento, and he has a history of harassing protesters and random passersby alike. Perrine frequently travels to participate in extremist rallies, including Patriot Prayer in the Pacific Northwest, the recent No to Marxism rally in Berkeley, and the MOAR (Mother of All Rallies) Trump rally in Washington, D.C. He has also been previously affiliated with the Sacramento Proud Boys, although they eventually kicked him out for being a loose cannon and a white nationalist.

Jeffrey Perrine first showed up on our radar in January of 2018, when he attended Unite America First, a patriot rally in Sacramento that drew attendees like Kyle Chapman (AKA Based Stickman), local neo-Nazi Chris Alden Locke, the Sacramento Proud Boys, and members of the III% militia movement. After the event, Perrine and his buddies ganged up on a passing teenager who took issue with the group’s Trump signage and anti-immigrant chants. It’s unclear what exactly went on during the exchange, but Perrine’s role in it was offensive enough that a random jogger ran up on him after hearing what happened. The rest of Perrine’s party stood around watching as the jogger knocked him to the ground and landed multiple blows to his face. Talk about vigilante justice! 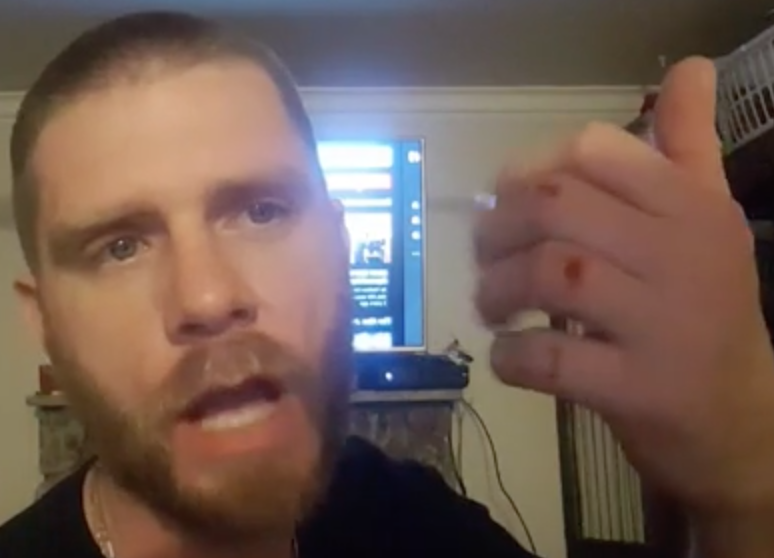 Jeffrey showing off his injuries from the jogger incident.

Perrine engaged in similar street harassment after attending a “Vote Dem Out” event at the State Capitol in early March. The event consisted of Jeffrey and a group of roughly ten other patriots and far right live streamers (including Ben Bergquam of Frontline America, Will Johnson of Unite America First, and several Sacramento Proud Boys) who disrupted a meeting at the State Capitol and later roamed the downtown area wearing MAGA hats and shouting pro-Trump and anti-immigrant slogans. While downtown, Perrine and others began recording a young transgender individual and taunting them with transphobic slurs after the individual confronted the group about their xenophobic language and Trump memorabilia. Perrine began shouting at the young person, demanding information and speculating about their genitalia, and declaring that “transgenderism is a mental illness.” The group continued demeaning and verbally attacking their target on camera until the individual was forced to run across the street to escape the situation. Afterward, Perrine could be heard whooping and laughing in celebration and yelling “I love it!” This targeted attack on a trans person further shows what a danger Perrine is to our community. Perrine and those like him are the reason trans people often fear for their safety in public. Not only is he actively organizing to promote his bigoted beliefs, but he is also willing to act on those beliefs in a way that poses an immediate threat to those he discriminates against.

A few days later, Perrine showed up to disrupt a leftist protest against Jeff Sessions with several Proud Boys, far right livestreamers, and neo-Nazi Chris Alden Locke in tow. Perrine attempted to escalate the situation by hounding the protest with anti-immigrant rhetoric and blaring the siren feature on his megaphone. During the event, Chris Alden Locke seig heiled multiple times and eventually yelled racial slurs at a black protester. Perrine, who had previously been buddy-buddy with Locke, attempted to separate himself from the situation after the racist outburst. However, Locke and Perrine had been friends up until that point despite Locke’s outspoken support of Nazism and overtly racist Facebook posts. It’s unreasonable to assume that Perrine was unaware of Locke’s beliefs until that moment- rather, it’s clear that he was unconcerned by them until Locke made him look bad in the public sphere. Perrine continues to maintain a Facebook friendship with Locke.

In fact, Jeffrey has no problem taking similarly extremist stances and saying similarly racist things. At the June 30th Patriot Prayer rally in Portland, Perrine was recorded shouting that “Illegal immigrants should have their heads smashed into the concrete.” He was involved with the Sacramento Proud Boys at the time and showed up to the event wearing body armor, clearly prepared for street fighting. Jeffrey was later documented kicking an anti-fascist protester while they were down. He was arrested during the event, and photos of his detainment went viral online. After the Portland rally, the Proud Boys reportedly distanced themselves from Perrine because his overt white nationalism was bad for their public image. 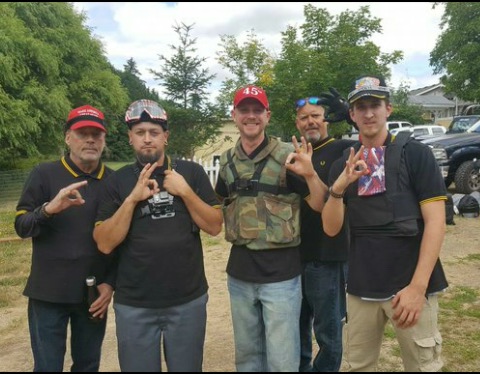 Jeffrey (center) and other Sacramento Proud Boys displaying white power hand gestures while gearing up for Patriot Prayer in Portland. 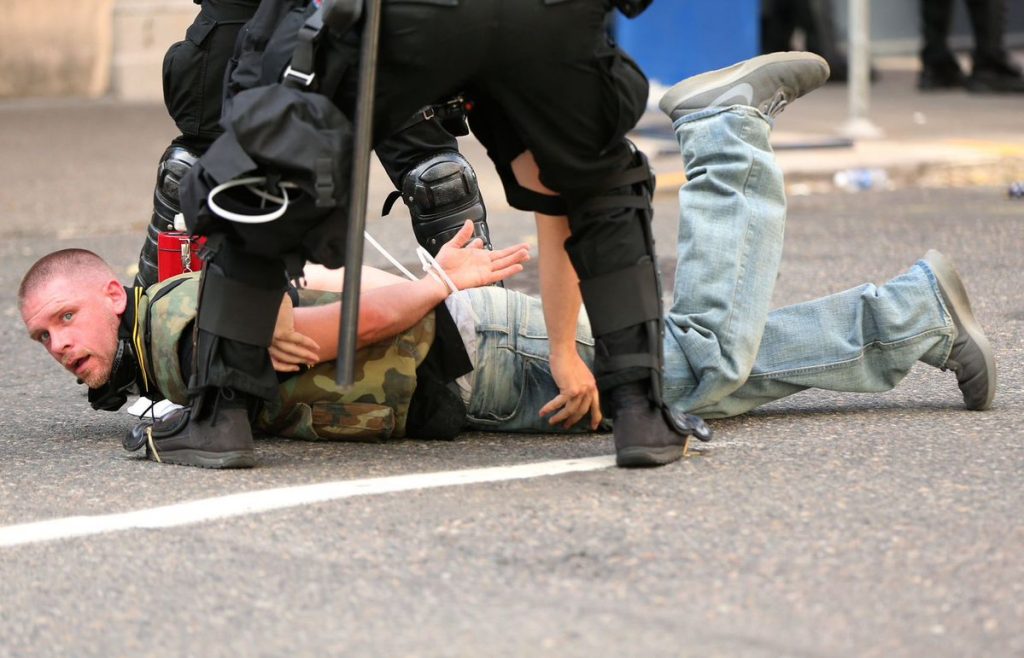 Jeffrey Perrine being detained in Portland.

Here is the clip where Perrine announces that “Illegal immigrants should have their heads smashed into the concrete.”:

At #Portland rally, Proud Boys and Patriot Prayer called for immigrants heads to be "smash[ed]…into the concrete," seen giving Nazi salutes and screaming racial slurs. They don't just want to fight 'the Left,' but attack broad segments of the population. https://t.co/dPlbZby4QS pic.twitter.com/d2drdkAuhB

And here is a clip where Perrine can be seen kicking an anti-fascist while they are down on June 30th in Portland:

For anyone wondering why observers felt Saturday's violence in Portland had a disturbingly vicious quality to it, this little scene will explain why. This was fairly typical of what we were seeing from Proud Boys: Whole gangs attacking single vulnerable counterprotesters. pic.twitter.com/F3jP6yBILM 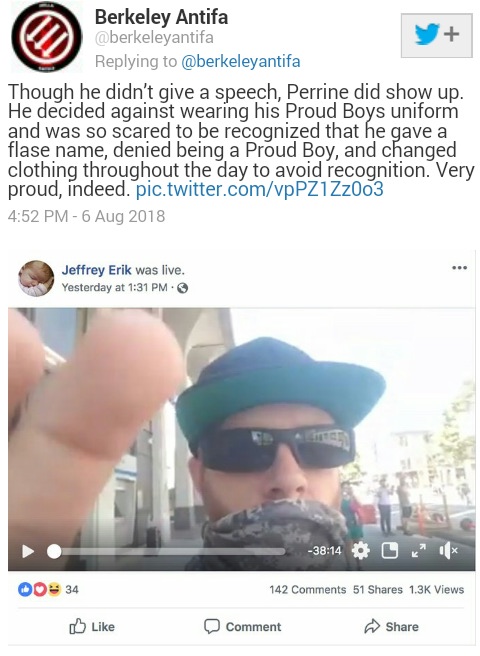 In September, Perrine traveled to Washington, D.C. for the MOAR Trump Rally. Footage of the event’s after party showed Perrine being confronted over his racist views. Later, Perrine was videotaped talking with two Black Trump supporters about how slavery wasn’t actually that bad. In the following clip, Perrine explains to Patriot Prayer organizer Joey Gibson why he was kicked out of the Sacramento chapter of the Proud Boys:

Jeffrey Perrine confirms he was kicked out of the Proud Boys for being a white nationalist and that the orders for removal came from Ethan Nordean by way of Gabe Silva. pic.twitter.com/UxZ28C3ABC

Perrine’s racist, transphobic, and anti-immigrant views pose a serious threat to marginalized people in our community. His extremism is so intense that even dangerous and bigoted alt-right groups like the Proud Boys refuse to associate with him. What’s worse, he has shown an alarming pattern of terrorizing LGBT people, immigrants, leftists, and all others he opposes with street harassment, threats of violence, and physical attacks. Jeffrey’s escalation from a right-wing rally goer to an advocate and agent of targeted violence is disturbing but unsurprising. One of the most dangerous aspects of the so-called patriot movement is the way it funnels bigoted individuals down the path to further extremism and emboldens them to act on their discriminatory views. It’s critical that our community is made aware of Jeffrey Perrine before his behavior escalates any further.

Jeffrey is currently unemployed and lives in the Sacramento suburbs. His partner, Kimmy Williams, is also engaged in far right organizing. His legal address is in Citrus Heights, but he spends most of his time at Kimmy’s house in Orangevale. 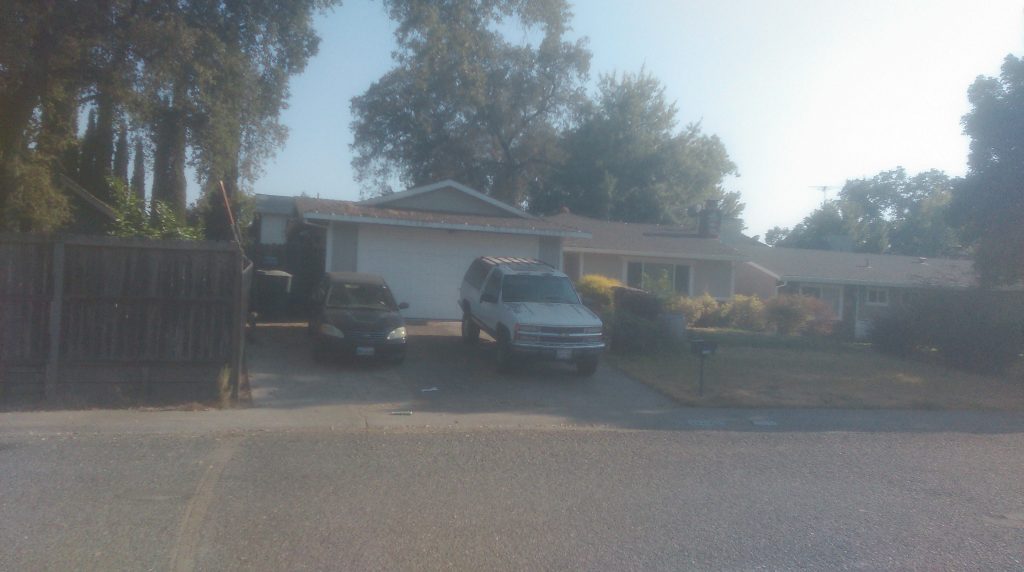 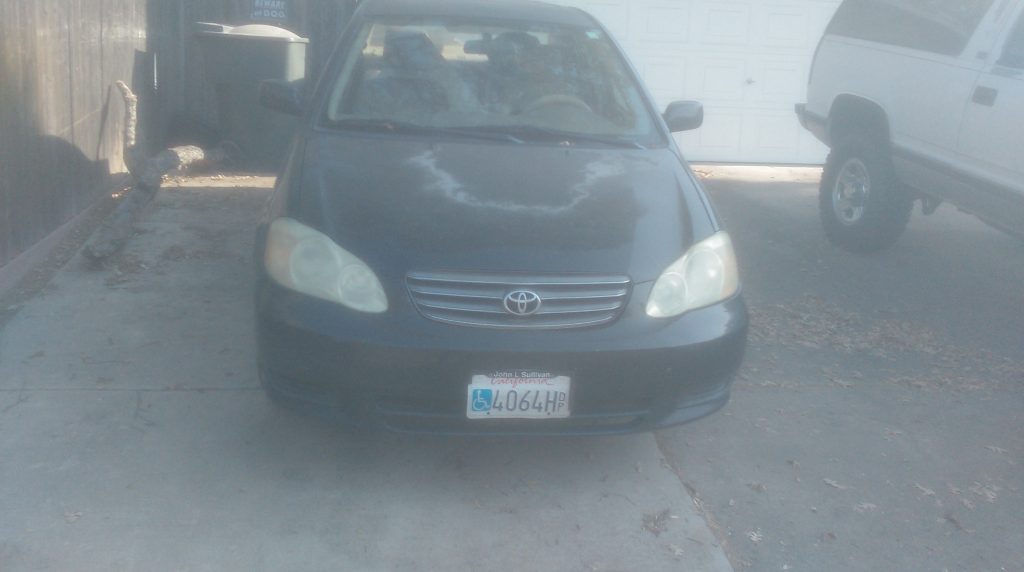 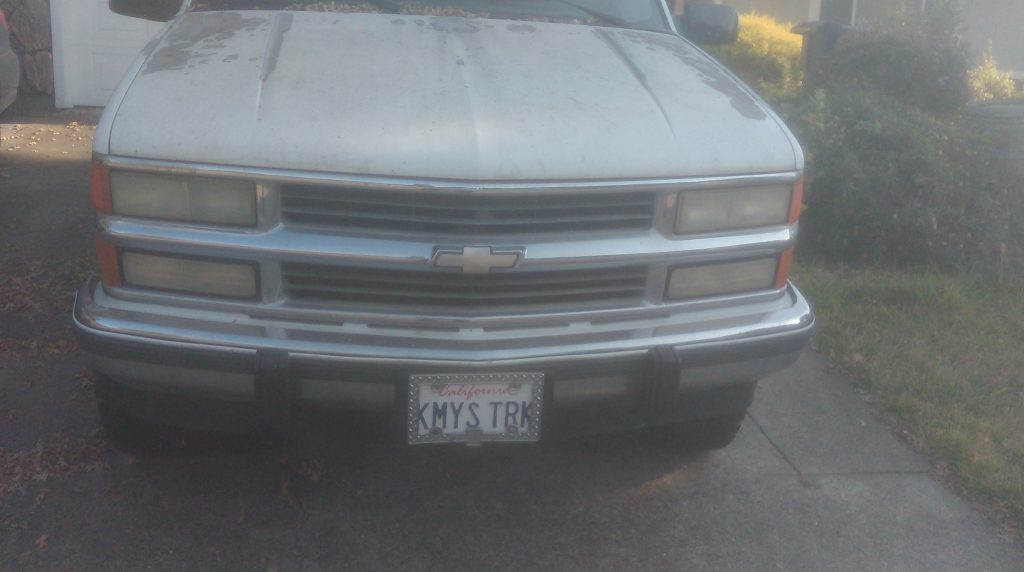 Have more information on Jeffrey Perrine or other far right extremists in the Sacramento area?

This entry was posted in Exposés, General. Bookmark the permalink.