Posted on December 6, 2016 by Antifa Sacramento 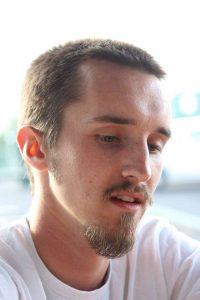 On November 24th, 2016, beloved community organizer and committed antifascist Michael Israel was killed serving the People’s Protection Units (YPG) in Syria. Michael was from Motherlode California, and was on his second tour in Syria as part of an effort to fight fascist powers there, including ISIS- he planned on staying for several months as an international volunteer before returning home. He died alongside fellow international brigade member Anton Leschek and several Kurdish YPG defenders after being targeted by Turkish airstrikes in western Manbij. He was just 27 years old. The community that Michael left behind is a broad one- in addition to his volunteer work in Rojava, Michael was also involved throughout the years in local groups such as the Motherlode Progressives, Occupy Sacramento, Sacramento IWW, the Anti-War Movement, SEIU, and the Democratic Socialists of America. He was a shining example of virtue in his community, and a comrade to many. His friends and family grieve him deeply, and remember him tenderly. Michael was hell-bent on changing the world for the better, and hell-bent on giving back more than he took at the end of the day. Though his time was short, his success is evident in the impact he made on those around him and the causes he was dedicated to. We, like much of the Sacramento radical community, have been deeply affected by Michael’s passing. In support of his family, Antifa Sacramento has taken on the work of putting together a memorial fundraiser. At the family’s request, all funds left over from memorial expenses will be donated to the Kurdish struggle in Rojava that Michael so selflessly sacrificed for. May he rest in power, and may his contribution and character never be forgotten. 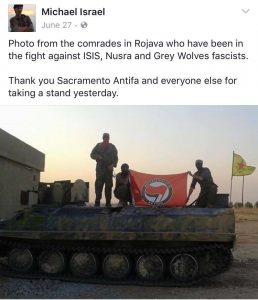 You honor us, and now we honor you.

This entry was posted in Fundraising, Support Work and tagged fundraising. Bookmark the permalink.